My camera and video camera are both able to take AVCHD Videos.

But of course, it is AVCHD Progressive, which is a trademark of Sony and Panasonic.

Most videos on Youtube nowadays are at least 1080p.

We can also take 3D photos and videos. Then play them on the TV. In this case, Bravia.

My camera and video camera has this symbol on it.


Posted by Administrator at 02:02 No comments:

This is my first video. It is the Yukikaze's anchor. Enjoy!

Choose 1080p and you should be able to see a bit more clearly. This is probably the first video of this anchor. There has been so many pictures but not many videos! I will take another one in 20 years time. 2034! I wonder if we will be able to smell and feel the air and wind? Right now though, the best on youtube is 4K. Mine is still 1080p. There is also an 8K and others. 4K video? Does that exist? Well Sony has this video camera http://www.sony.jp/handycam/products/FDR-AX100/
and camera http://www.sony.jp/ichigan/products/ILCE-7S/

Nowadays you should be able to make it to 1440p. 4K is a bit too hard for most computers.
Anyway, I will, I promise you, go back to this place and take a 4K version of this in under 20 years time. I will upload it onto Youtube.


Posted by Administrator at 01:19 No comments:

Email ThisBlogThis!Share to TwitterShare to FacebookShare to Pinterest
Labels: 雪風

It is in Eta-jima. The anchor lies beneath the trees and looks quite good.
Pictures: 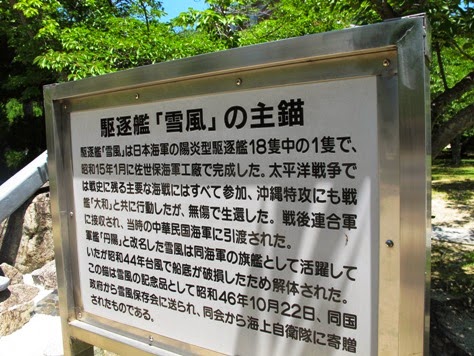 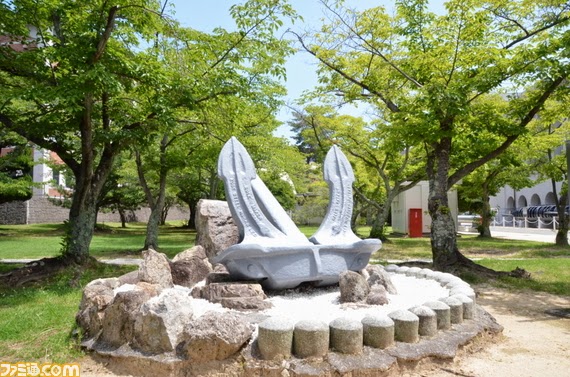 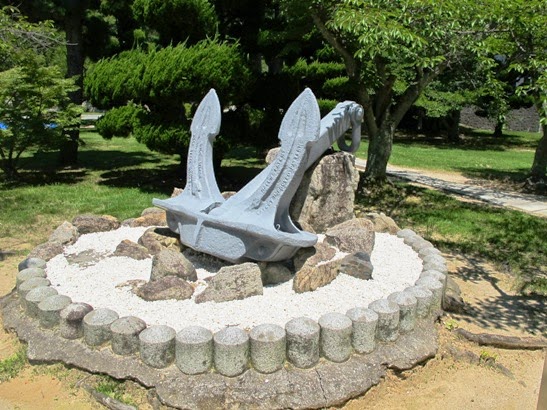 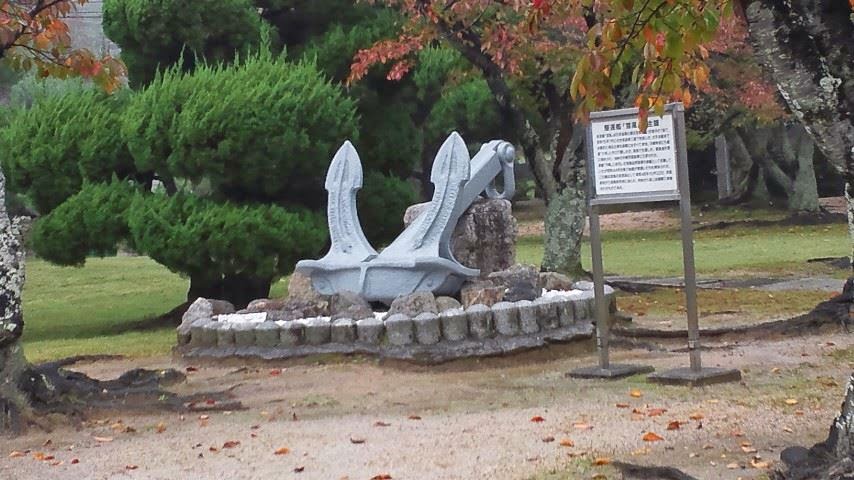 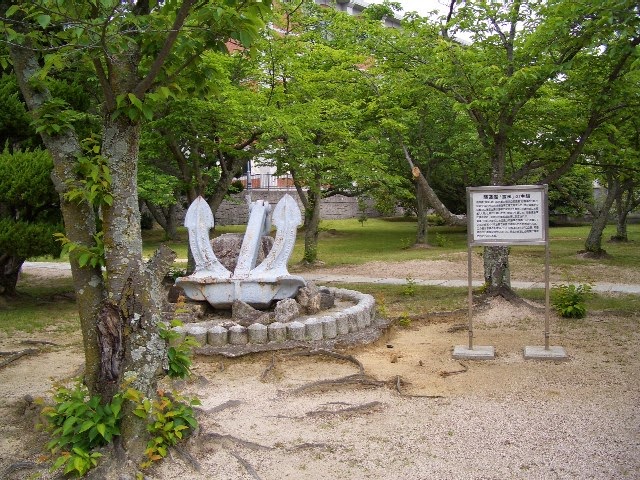 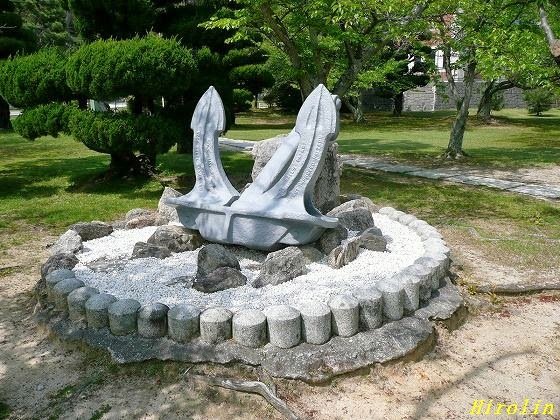 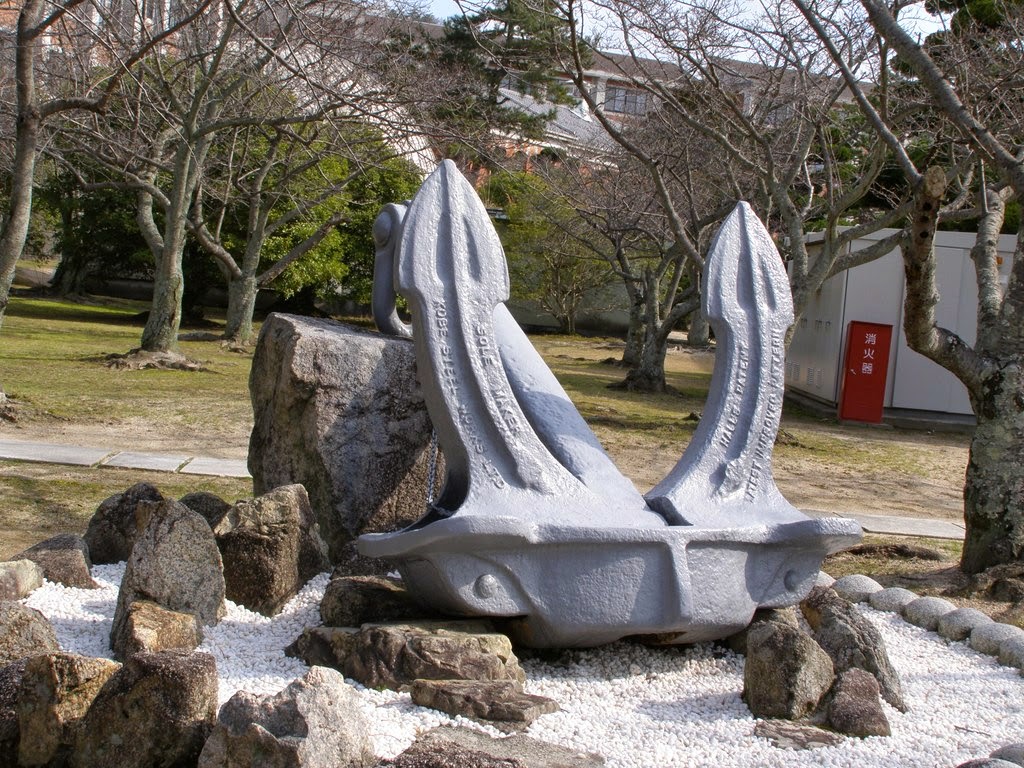 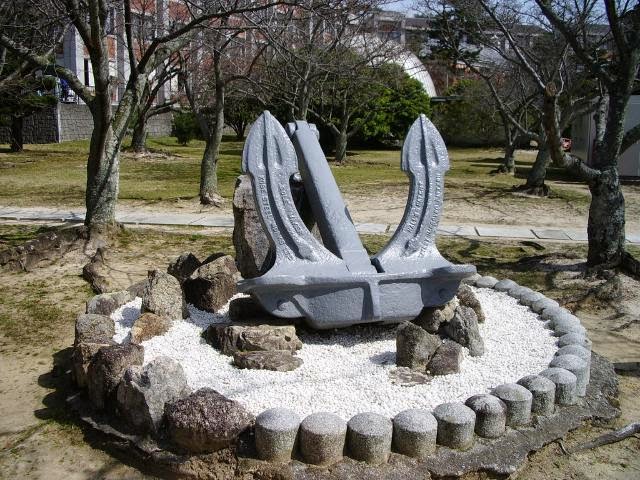 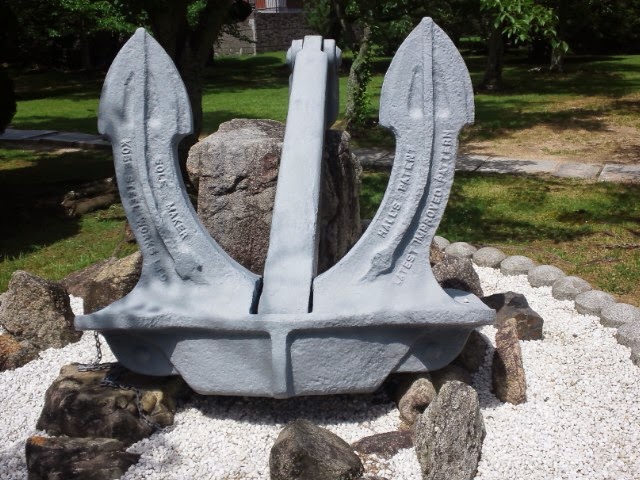 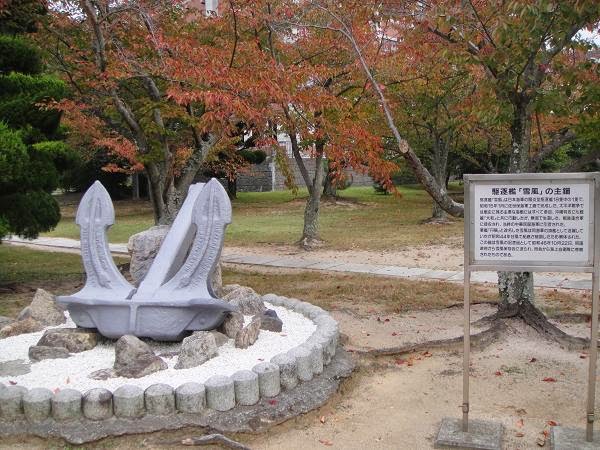 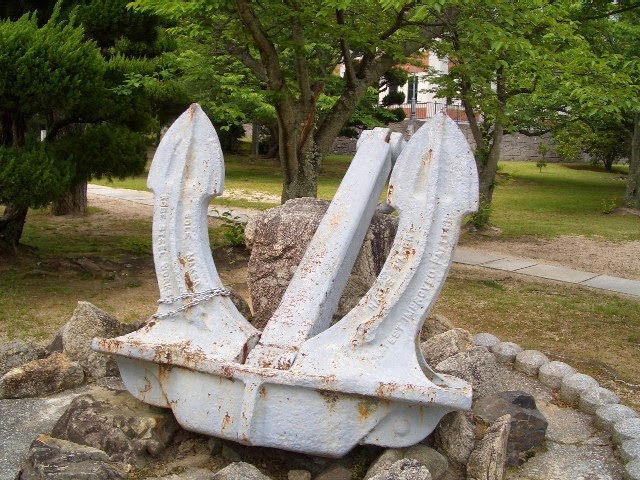 The steering wheel and clock cannot be taken as a photo, however, the screw is in Taiwan and looks like this: 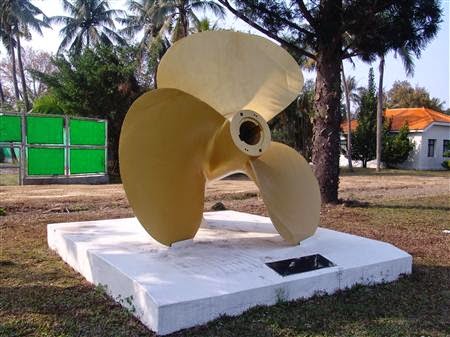 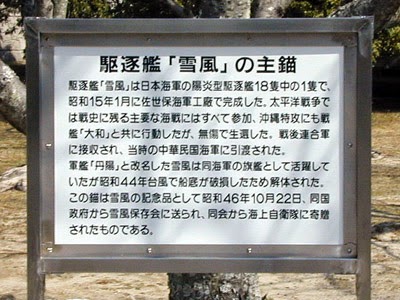 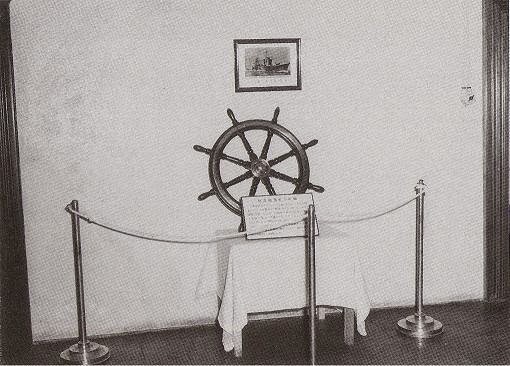 Posted by Administrator at 22:27 No comments:

I am a new author on this blog. My name is Leo Graf and I will post all sorts of interesting news and information. 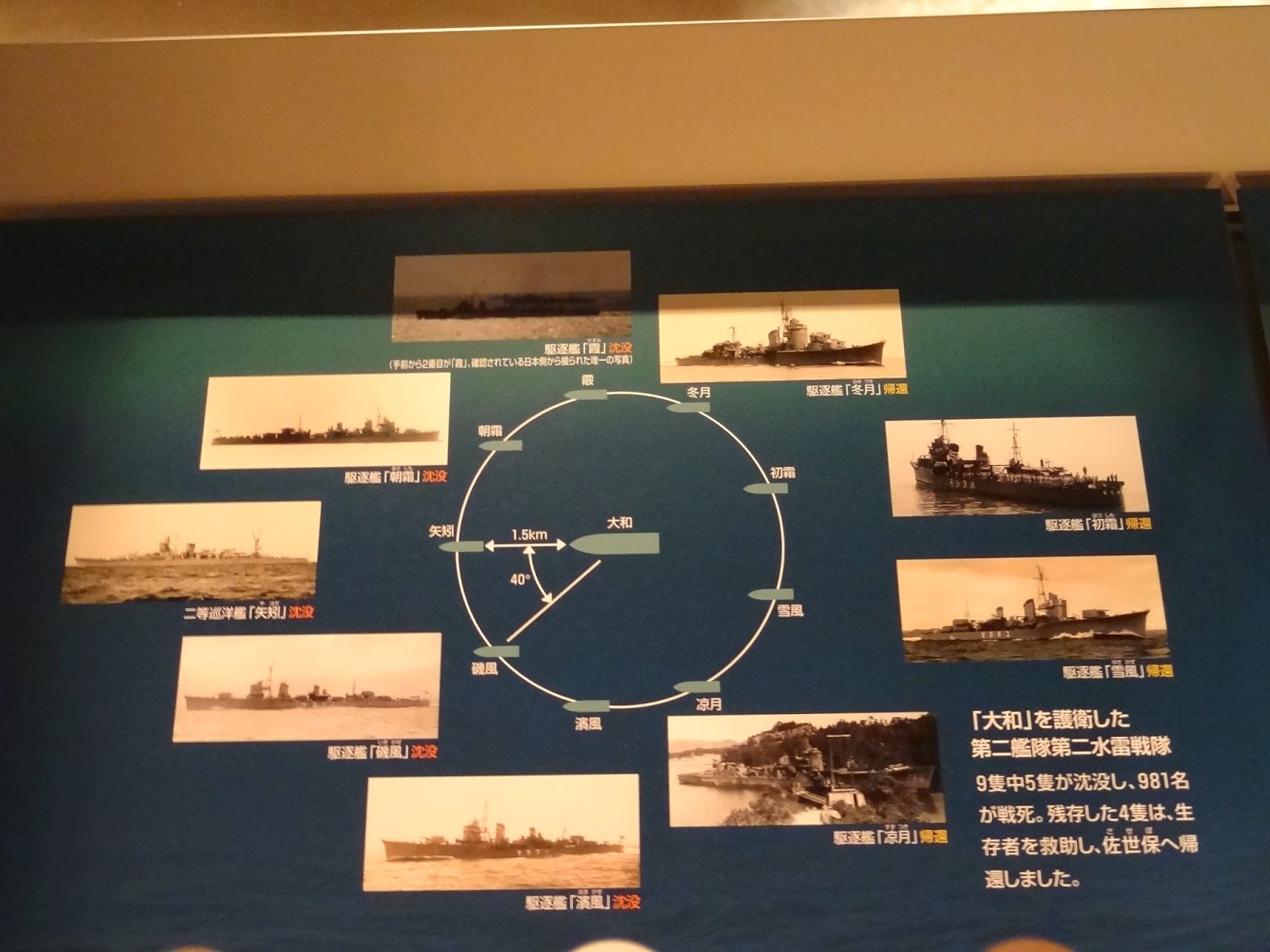 Ships that participated in the Ten-Ichi-Go: 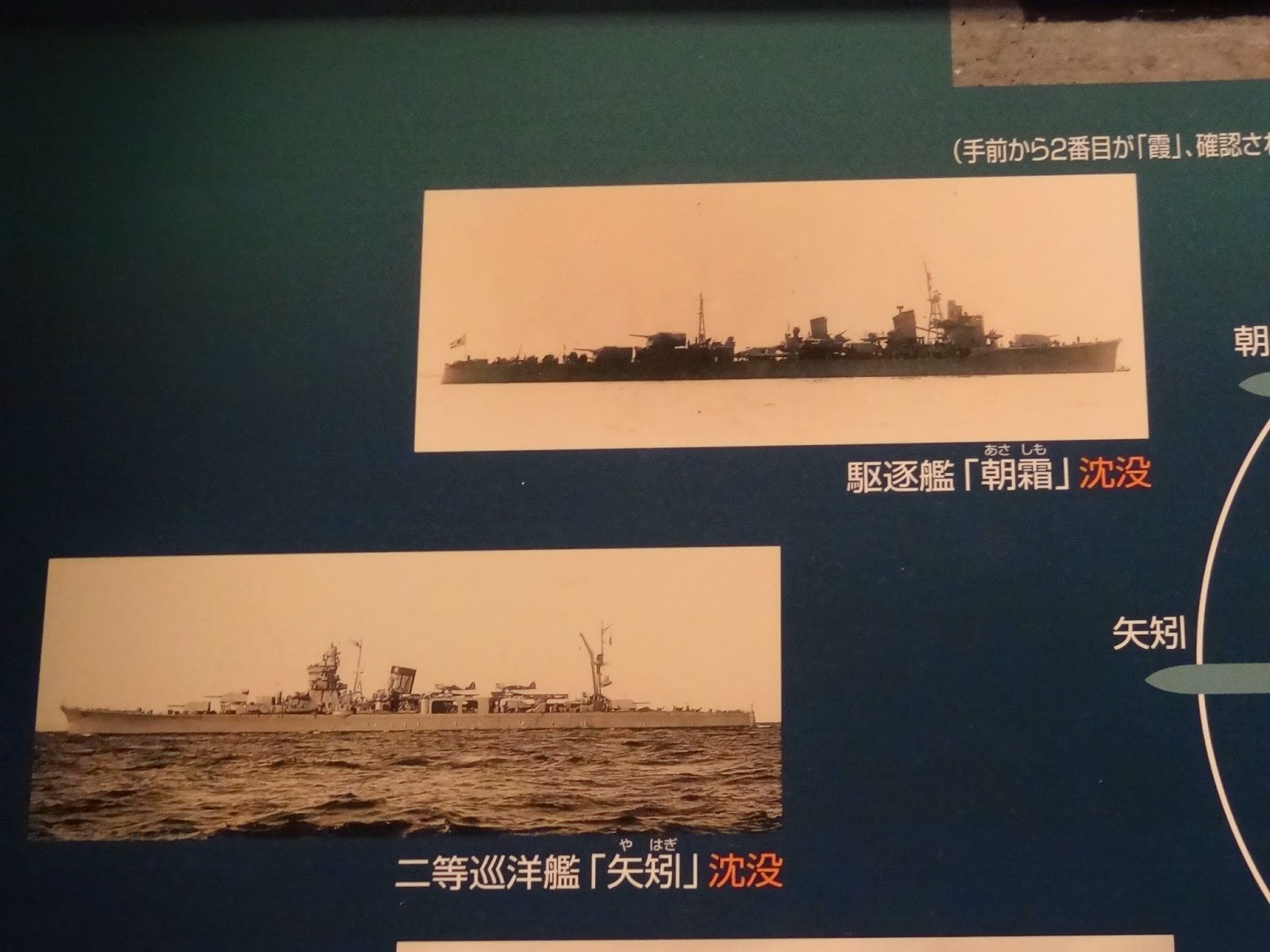 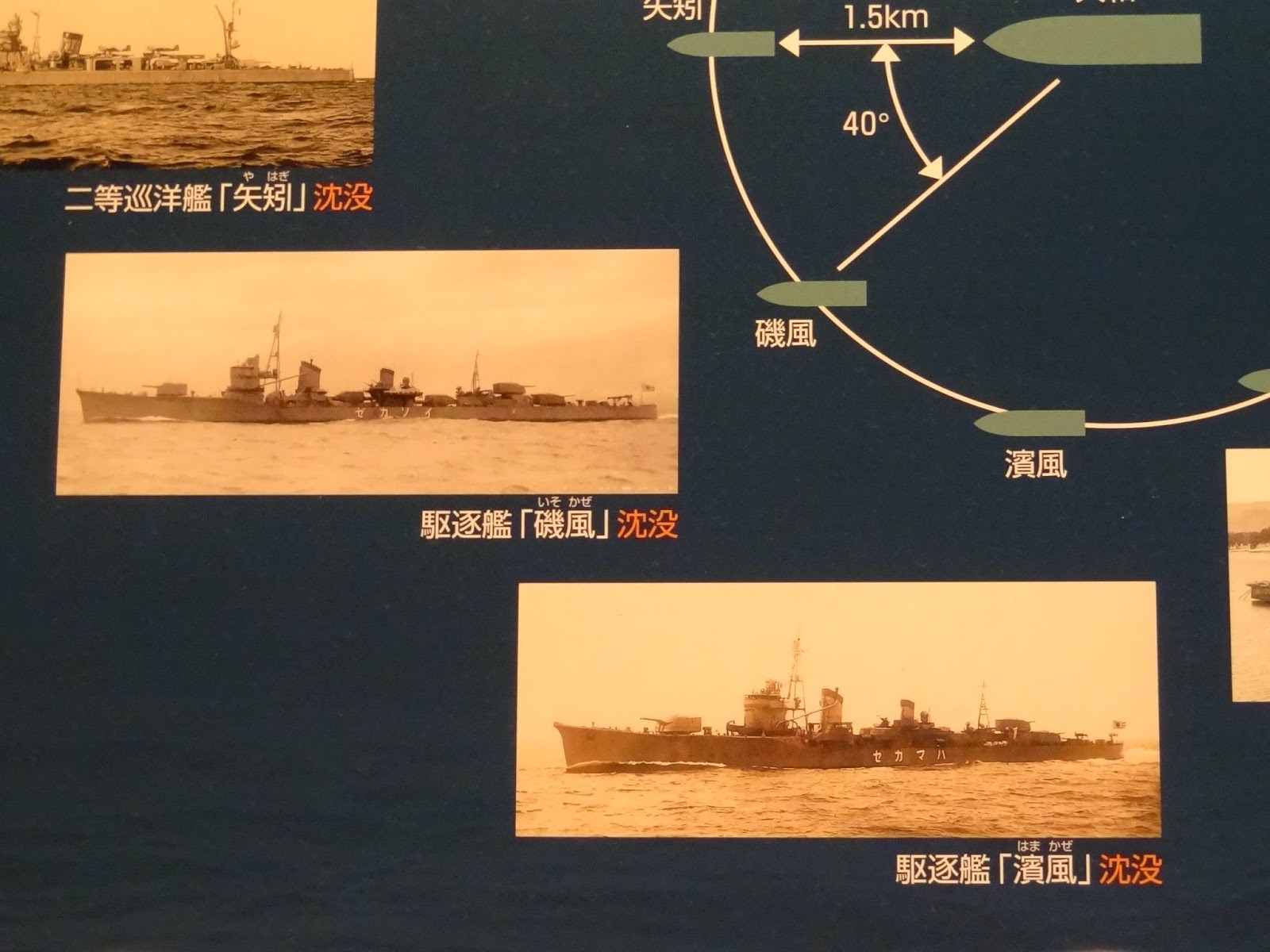 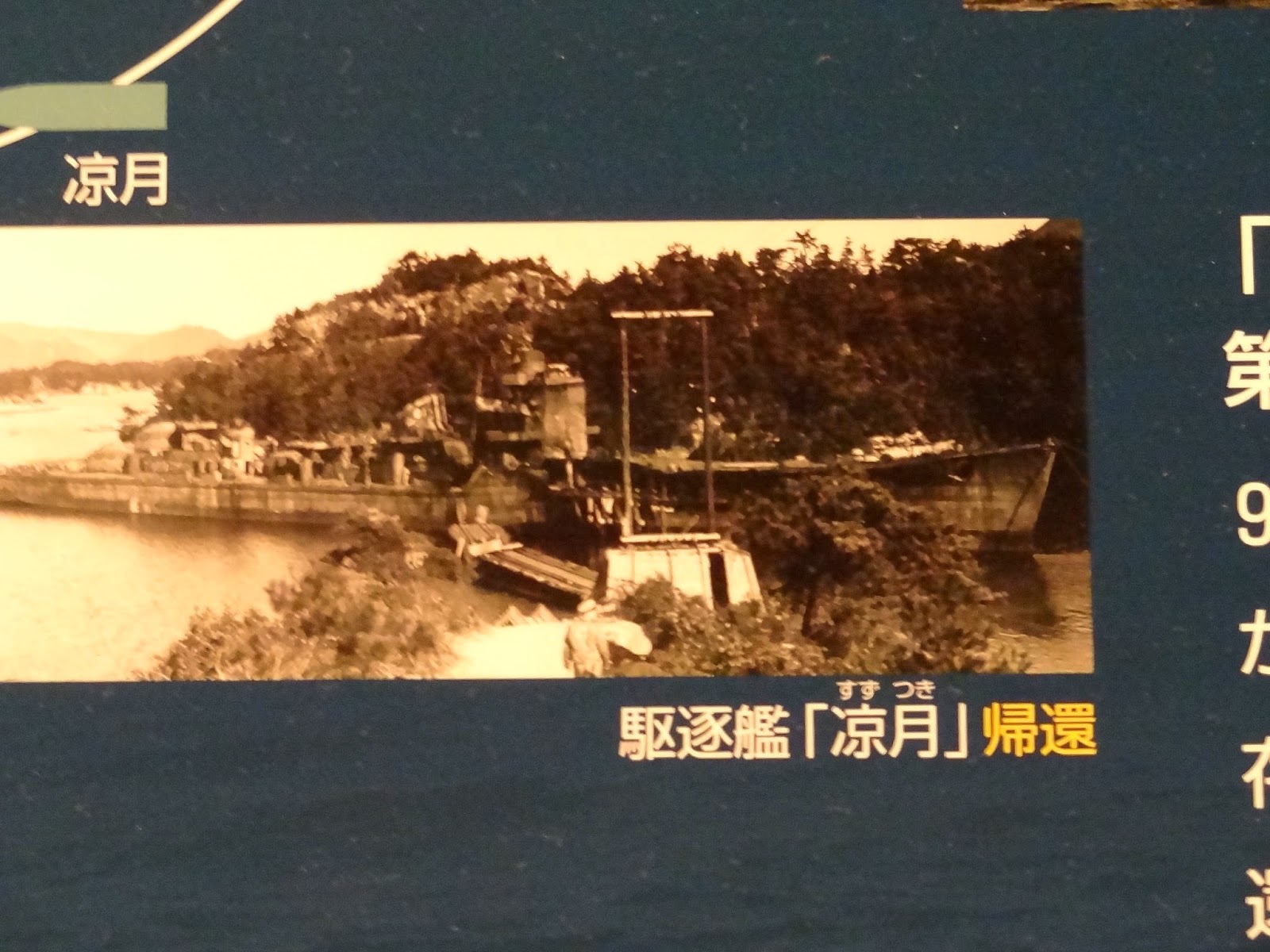 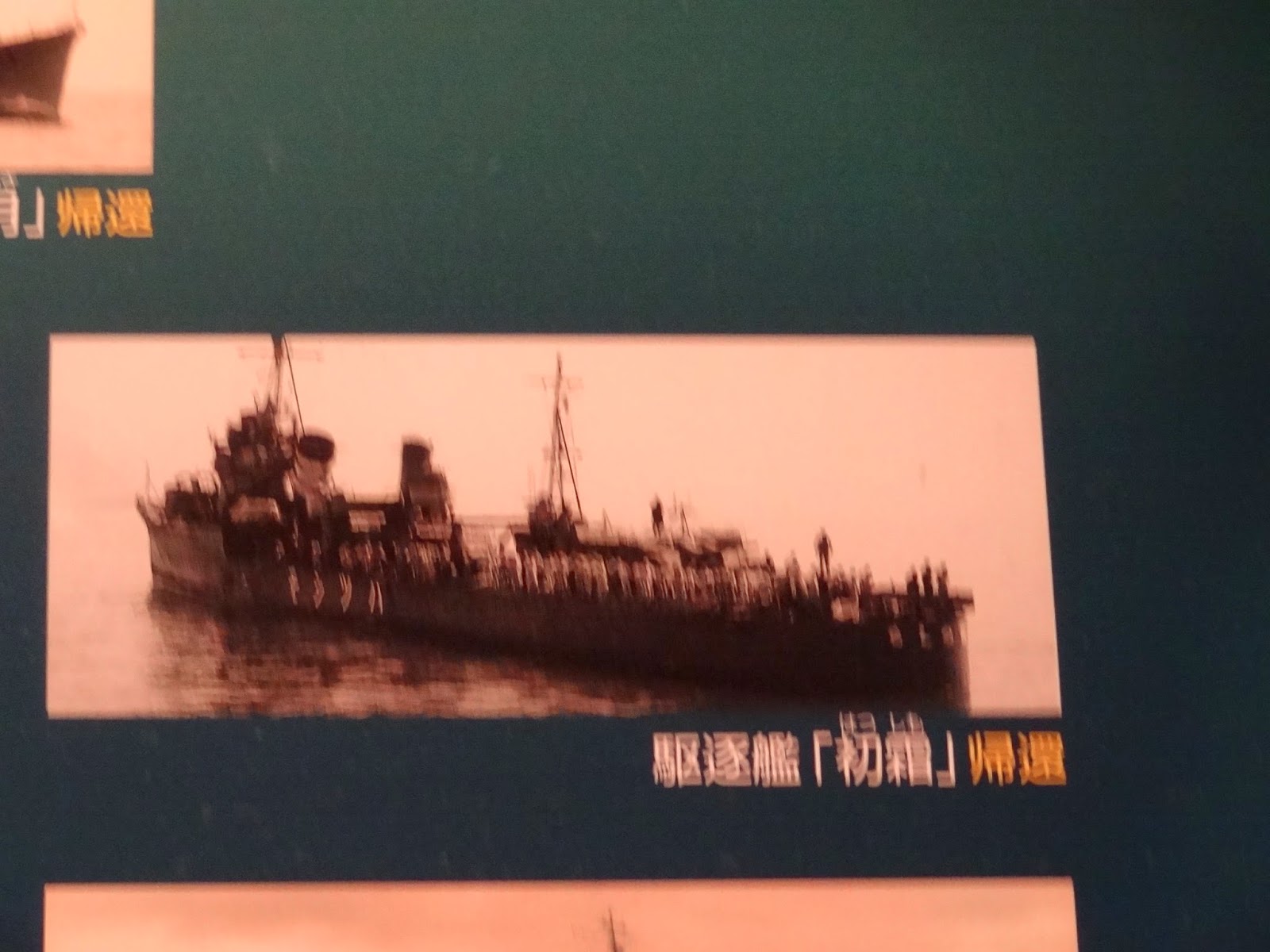 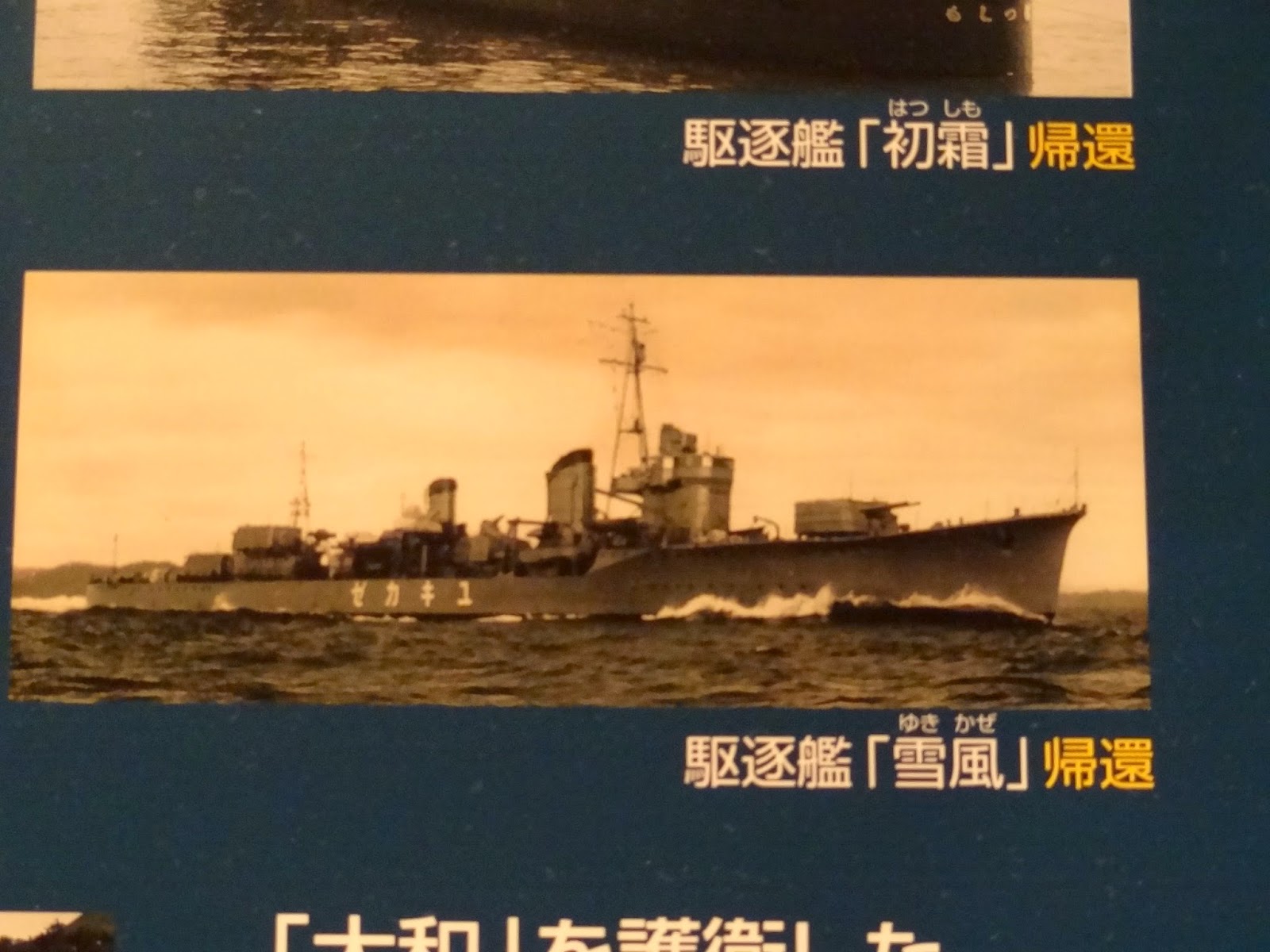 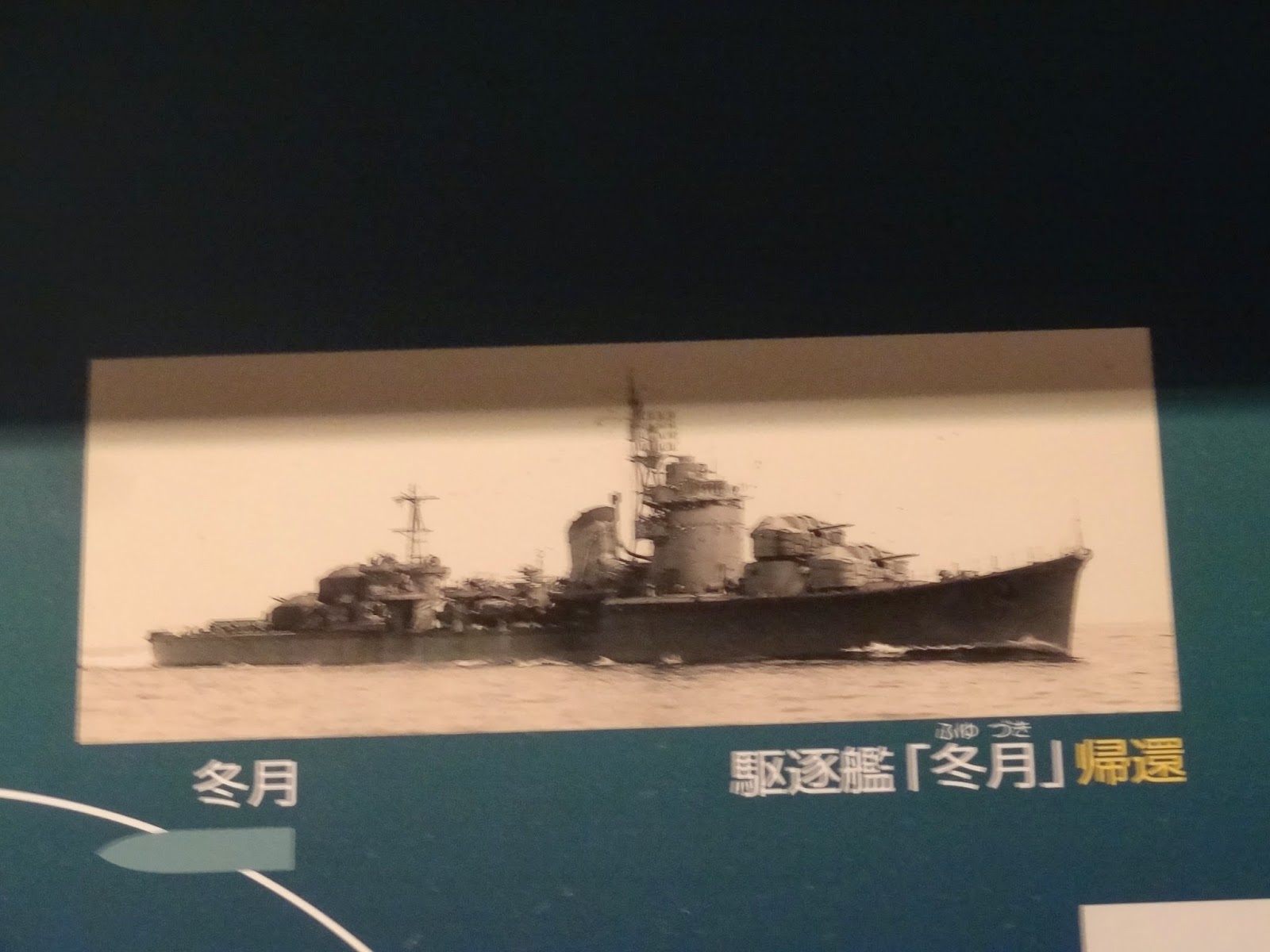 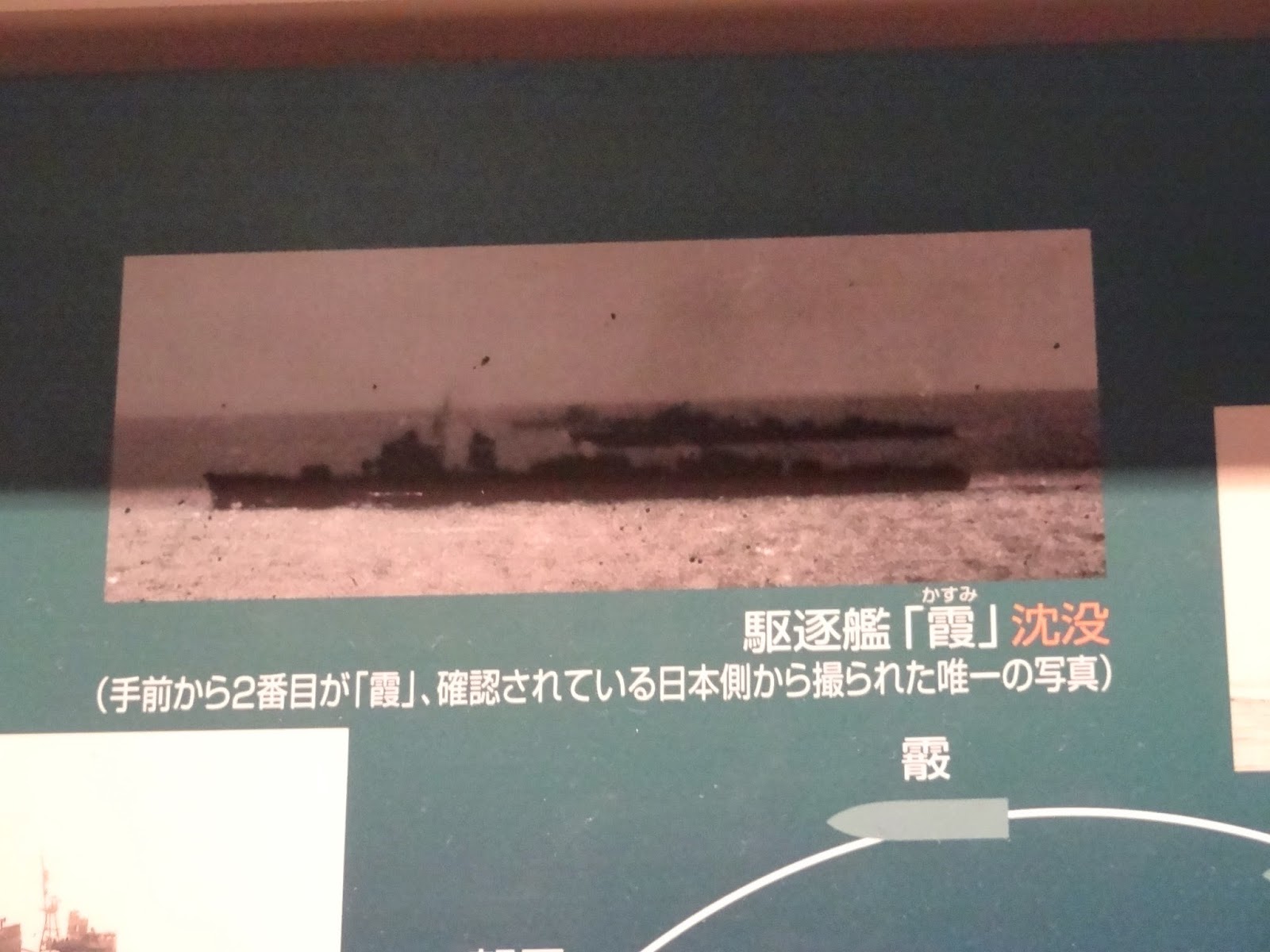 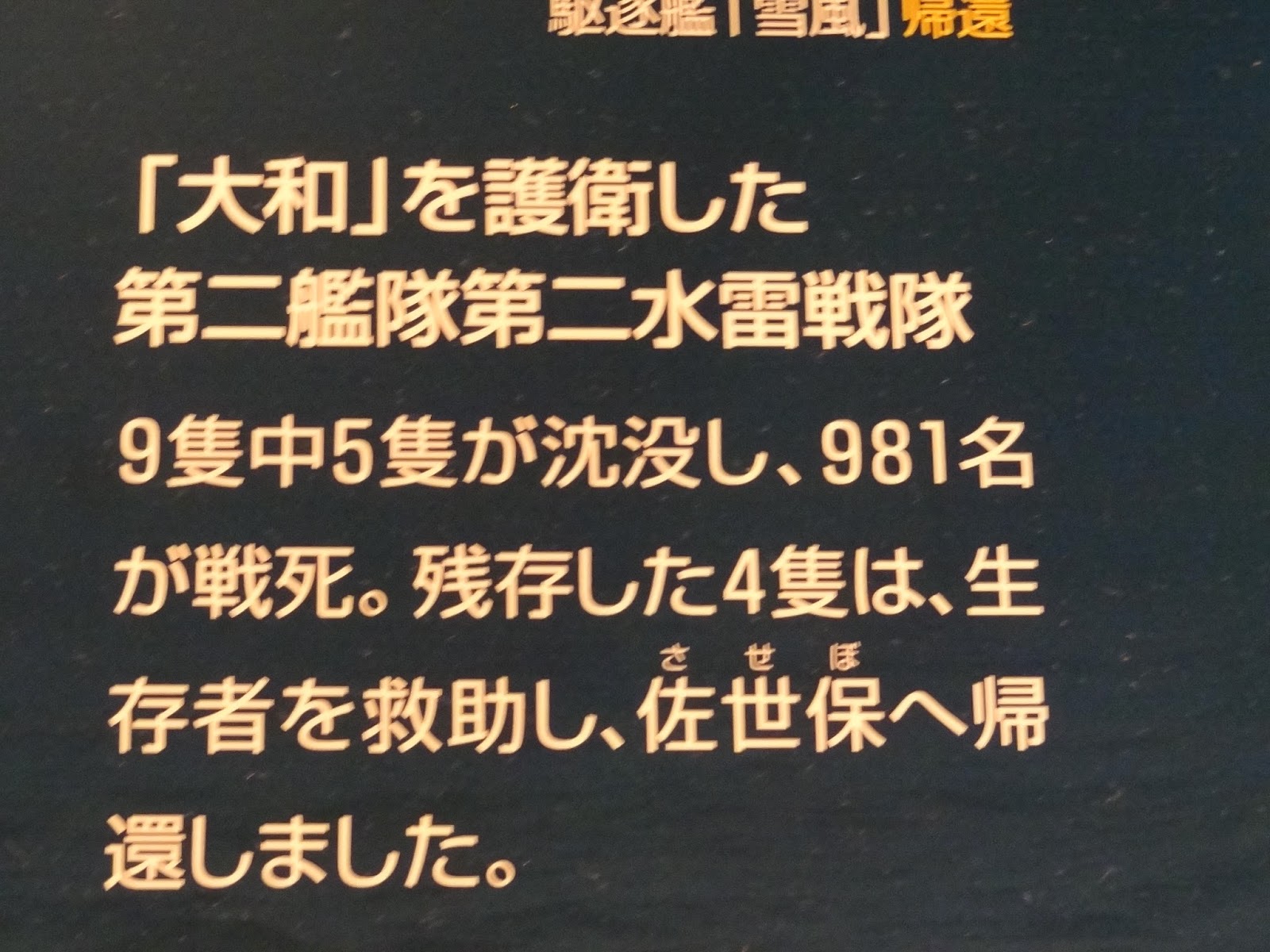 The 2nd Mine squadron of the 2nd Fleet protected Battleship Yamato.

Of the 9 ships that went, 5 of them sank, and 981 people died. The other 4 ships rescued survivors and returned to Sasebo.

How they were layed out: 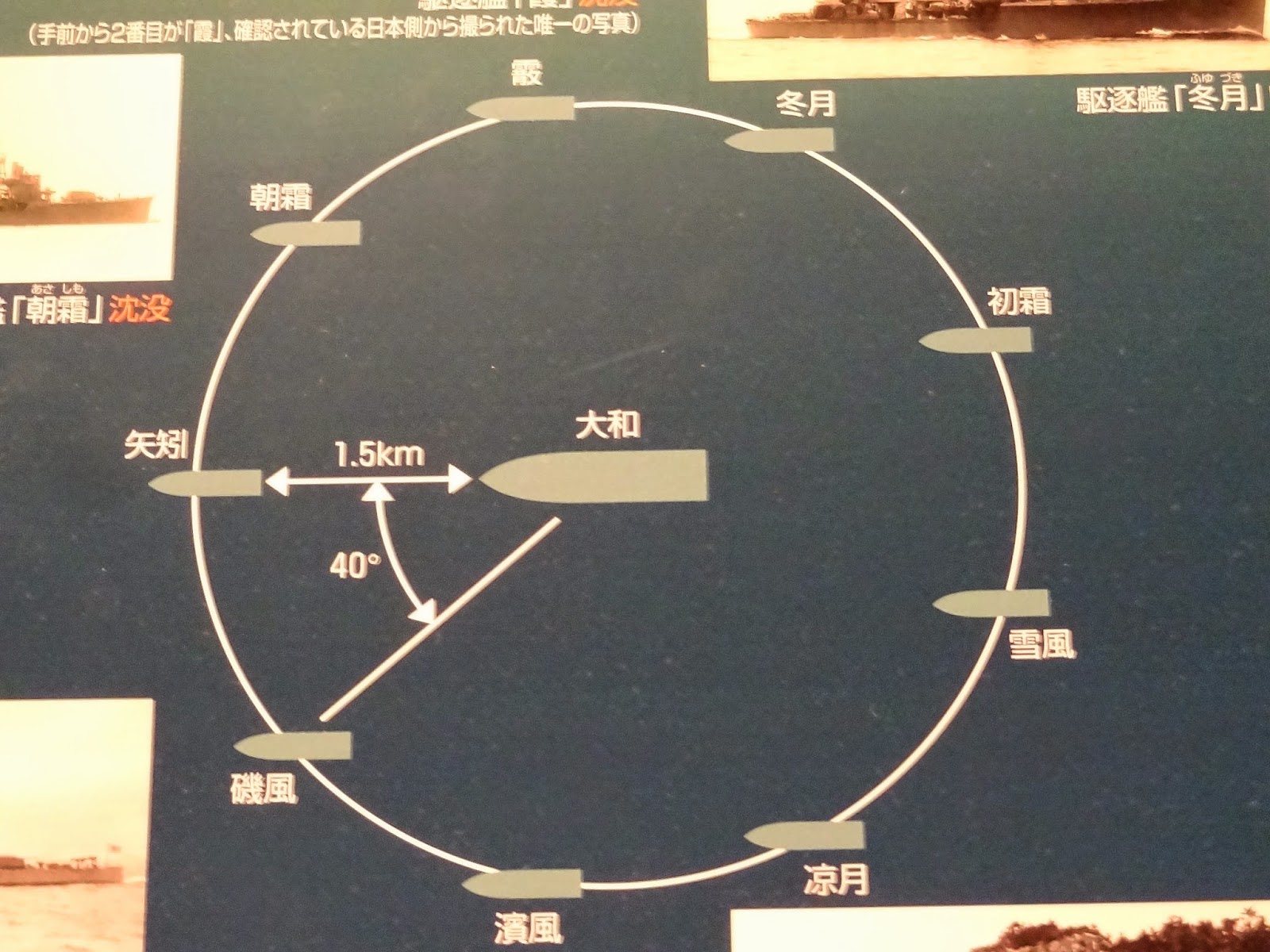 The famous destroyer Fuyuzuki rescued survivors from Kasumi and returned to Sasebo. Fuyuzuki was half wrecked. Kasumi couldn't move anymore.

Notes on the pictures of ships... 帰還 means it returned
沈没 means it sank...

More information can be seen on Wikipedia, if you search a little.
Anyway, it was basically a fight between ships and aircraft. The aircraft won, and we now know that ships are no match for aircraft. This fight is known in Japan as 坊ノ岬沖海戦.

The main power used to be the Battleship, and then the importance of aeroplanes moved it to aircraft carriers. Now, the most important ships are nuclear powered submarines. To fight it, one must have other submarines or destroyers.

Posted by Administrator at 22:21 No comments:

The Difference Between Humans and Animals

I think I could turn and live with animals, they are so placid and self-contain'd,
I stand and look at them long and long.
They do not sweat and whine about their condition,
They do not lie awake in the dark and weep for their sins,
They do not make me sick discussing their duty to God,
Not one is dissatisfied, not one is demented with the mania of owning things,
Not one kneels to another, nor to his kind that lived thousands of years ago,
Not one is respectable or unhappy over the whole earth.

Walt Whitman
Posted by Administrator at 01:03 No comments:

Life is but a Dream

A boat, beneath a sunny sky
Lingering onward dreamily
In an evening of July

Children three that nestle near,
Eager eye and willing ear,
Pleased a simple tale to hear

Children yet, the tale to hear,
Eager eye and willing ear,
Lovingly shall nestle near.

Ever drifting down the stream
Lingering in the golden gleam
Life, what is it but a dream?

This is an acrostic poem that spells out Alice's full name. Alice Pleasance Liddell
- See more at: http://allpoetry.com/Life-is-but-a-Dream#sthash.TMQBPMuY.dpuf
Posted by Administrator at 00:57 No comments: 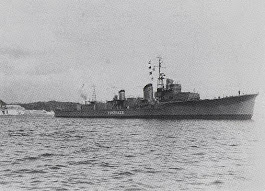 The reason of the name 'The Yukikaze Times'